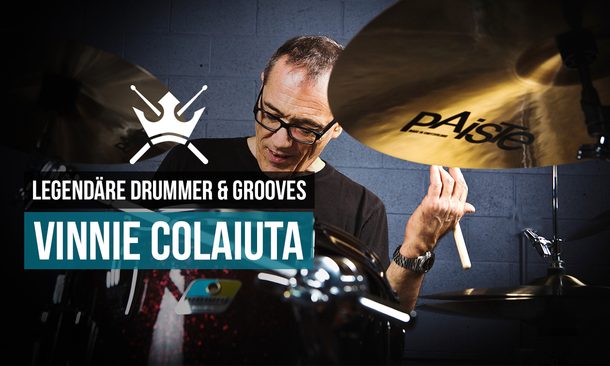 In the fifth edition of my workshop series “legendary drummers – legendary grooves” we are talking about the master of masters, the one and only Vinnie Colaiuta and his “turning  Ride-Cymbal-Bell” within the infamous 7/8 groove from  the song “Saint Augustine In Hell” by his long time employer, Superstar Sting.

There are countless musical reasons for the legendary status Vinnie has earned for himself in the drumming community over the decades, his breathtaking, virtuos and yet stunningly tasteful playing has inspired and impressed legions of drummers worldwide.

The workshop is dedicated to the groove for the song “Saint Augustine In Hell”, found on the 1993 Grammy Award winning Album “Ten Summoner’s Tales”. The fairly simple 7/8 groove is a perfect example for Vinnie’s ability to contribute exactly what a song needs, yet  adding an innovative touch including style and finesse.

As far as I recall, there has not been a comparable groove before this, utilizing the “moving ride cup in quarter notes” ; an idea which generates the illusion of a straight pop song-feel, playfully avoiding the usual clunkyness of an an odd meter beat.

This bonedo drums -exclusive workshop, featuring another timeless masterpiece, comes, as usual, with transcriptions, groove analysis as well as authentic re-recordings by your’s truly. Take the opportunity and learn from the drumming genius of a unique drumming hero, and let yourself be inspired for coming up with your own odd meter creations.

Wishing you great fun with the work of a true legend – Vinnie Colaiuta!